President Barak Obama,
​
The core essential approach to Syria, as outlined herein, is not either we go in or the Russians, but both.

The Russians to patrol the north of Syria, while US forces take control of the south.

To do otherwise is to court disaster.

We learn to cooperate with our allies in this fight in the crucible, that is, on the battlefield of containment.

Again, this was never an either us or them proposition, but both. 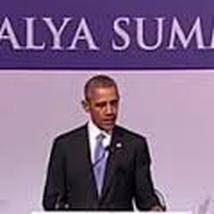 President Obama, in a carefully worded statement, responds to call
for US troops to join Russian troop on the ground in Syria

While leaving no doubt that his stance on the question of US troops on the ground in Syria reflected the thinking of the entire US military command establishment, Obama posed the following rhetorical question: