Obama Responds to Letter on Syria 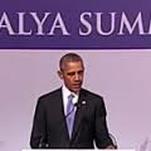 President Obama, in a carefully worded statement, responds to call
for US troops to join Russian troops on the ground in Syria
(letter to Obama from Eric LaMont Gregory reprinted below)

While leaving no doubt that his stance on the question of US troops on the ground in Syria reflects the thinking of the US military command establishment, an establishment whose advice rules out the introduction of substantial numbers of American ground troops in Syria, President Obama posed the following rhetorical statement:

"There have been a few (this author among them) who have suggested that we should put large numbers of US troops on the ground ...  It's not just my view, but the view of my closest military and civilian advisers that that would be a mistake, not because our military could not march into Mosul or Raqqa or Ramadi and temporarily clear out ISIL, but because we would see a repetition of what we've seen before, which is that if you don't have local populations that are committed to inclusive governments, and who are pushing back against ideological extremes, that they resurface unless we're prepared to have a permanent occupation of these countries.  And let's assume that we were to send 50,000 troops into Syria, what happens when there is a terrorist attack generated from Yemen?  Do we then send more troops into there?  Or Libya, perhaps?  Or if there is a terrorist network that is operating anywhere else in North Africa or in Southeast Asia.  So a strategy has to be one that can be sustained."

There are several fundamental problems with President Obama's understanding of the Syrian/ISIL crisis, and what ought to constitute a credible force to counter it, which should be subjected to the most careful scrutiny.

In essence, the problem lies in the failure to realize that the United States has reached the limit of its ability to contain, what is a world-wide Islamic jihadist threat, by means of constructing temporary bilateral and multilateral coalitions.

Second, it is highly unlikely that a meaningful short-life bilateral or multilateral force to counter world-wide radical Islamic violence that can achieve its goal can be put into place within the scope, vision and confines of the last year and two months of the Obama presidency.

Third, one must understand who the 'we' is that would constitute a force capable of containing radical Islamic violence, where ever and whenever it threatens peace and security.

Finally, yes, in some instances world peace and security will require a long-standing occupying force.  And, that is not only the best way forward, but the only credible way forward.

In the early 1960s, Governor Wallace of Alabama had announced his intention to personally stand in the way of a federal court order to integrate the University of Alabama.  President John Fitzgerald Kennedy, the Attorney General Robert Kennedy, and Vice President Lyndon Baines Johnson met in the Oval Office to work out the Kennedy administration's response to the developing constitutional crisis.

President Kennedy stated that Wallace could not be allowed to defy the court's decision, and that was clear and unequivocal.  Robert Kennedy suggested that he was prepared to order federal troops onto the campus of the University of Alabama, to assure compliance with the decision of the federal court.

Vice President Johnson, stated 'Okay, you send federal troops onto the campus of the University of Alabama and you make Governor Wallace step aside, then do you send troops into South Carolina when that governor refuses to comply, or Georgia, Ohio, and Missouri when those governors defy the court's order?  And, are we prepared to send federal troops into Mississippi when a local school official in that state defies the court?  Whatever we agree to do here today has to be a policy that we can actually carry out, or I predict that the acts of defiance will outstrip our abilty to respond with federal troops in each and every case.

As you are well aware Mr President, the decisive act of sending federal troops onto the campus of the University of Alabama, forestalled the proliferation of defiance contrary to the federal court order across the south and the near south, which Johnson had envisioned.

President Obama, world security is no less important to the American people than it is that they can rely on the chief executive to see that the laws of the United States are faithfully and universally executed.  And, there is no question about that.

In relation to Obama's assessment of the military and civilian advisers within his government:

"There have been a few who have suggested that we should put large numbers of US troops on the ground ...  It's not just my view, but the view of my closest military and civilian advisers that that would be a mistake ... "

President Obama, the short reply to this statement is that 'on questions of taste and smell there is no argument.'

However, a review of US military and civilian intelligence gathering capability, intelligence analysis, and operational acumen, as it relates to the existence of worldwide Islamic violent jihad paints a disturbing portrayal.

A concise resume of worldwide Islamic jihad against the west has its origins in the founding of the Muslim Brotherhood at the end of World War I and the writings of Pakistani and Egyptian Islamic Revivalist scholars.  It should be remembered that Islamic Revivalism, refers to those individuals and movements that sought to strengthen Islamic influence in political, economic and social life, and grew into a broader worldwide movement in which people disaffected from their government and feeling threatened by the erosion of traditional values turn to religion as a source of identity.

All of the groups with which we are now concerned emanated from the Islamic Revivalist movement.  In 1957, the first jihad conference was convened in Cairo, at which time war was declared against the United States and all her allies.  Bin Laden's mentor and the Egyptian doctor who became has second in command all attended that conference.

Foreign intelligence services then assisted the Egyptian government in a all out war against the Muslim Brotherhood, including the assassination and execution of some of its most prominent members.  Others were jailed or escaped to Saudi Arabia, the West Bank, among other places.  The Egyptian doctor, Bin Laden's future second in command in Al Qaeda, joined Arafat on the West Bank and helped structure the political organization the PLO and an armed militia El Fatah.

US intelligence services, ever aware of the communist threat, actually assisted in the development of the Islamic Revivalist Movement in the hope that would help turn the Palestinian leaders away from Soviet support and communist ideology.  I need not dwell on the 'blow-back' literature that has followed this act of US civilian and military intelligence genius.

This author wrote an executive summary on Islamic violence against the West covering the period 1957 to 2005 for your predecessor.  And, after nearly four decades which involved this author in every region of the world where violent Islamic jihad has reared its head, I cannot share your confidence in the ethnocentric civilian and military intelligence services, who as planes flew into the World Trade Center Towers and the Pentagon were more interested in a group in Chicago, and the activities of one Barak Hussein Obama, than they were in the successors to those that had actually bombed the World Trade Center in 1993.

However, on questions of taste and smell there is no argument.

President Obama recently suggested that: "if anyone out there has a solution I am willing to listen."

The president's offer is timely and very welcomed.

Therefore this author is preparing a letter to the president, which offers just such a solution, that is, a way forward out of the current quagmire.

This article will be completed after President Obama and his civilian and mlitary advisers have had adequate time to respond to the proposal being sent to the White House on the 22nd of November 2015, global problem requires a global response.

Letter to Obama on Syria
3 November 2015 President Barak Obama,
​
The core essential approach to Syria, as outlined herein, is not either we go in or the Russians, but both.

The Russians to patrol the north of Syria, while US forces take control of the south.

To do otherwise is to court disaster.

We learn to cooperate with our allies in this fight in the crucible, that is, on the battlefield of containment.

Again, this was never an either us or them proposition, but both.

is now available for $24.99
and can be ordered through the publisher’s website:

http://sbprabooks.com/EricLaMontGregory
or at www.amazon.com
or www.barnesandnoble.com.